Since flu during pregnancy is quite common (thanks to your low immunity), and it could lead to severe infections (such as pneumonia) [1, 11], taking a flu vaccine may be recommended for the safety of you and your baby. However, still, there are some pros and cons to consider before going for it. 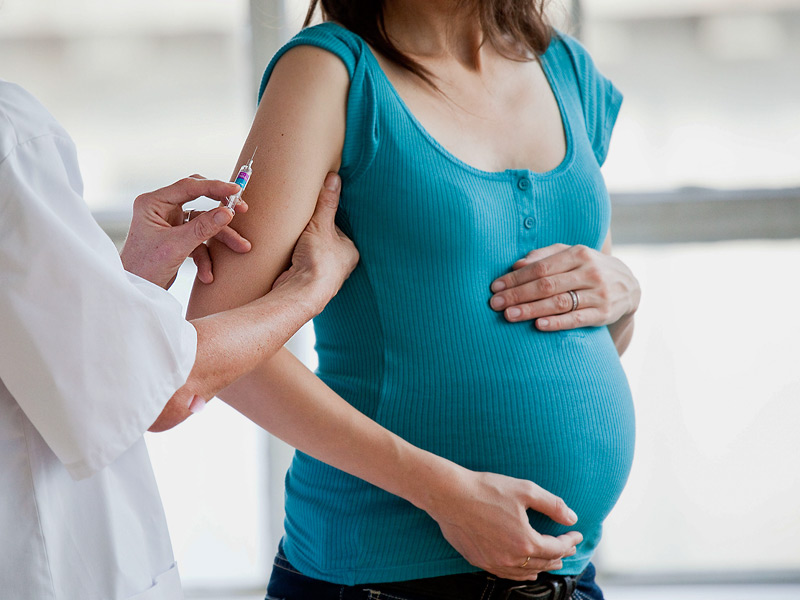 Can you get a flu shot while pregnant

The flu vaccine is considered safe with no serious adverse effects [11] and is given to millions of pregnant women every year.

The American College of Obstetricians and Gynecologists, Centers for Disease Control and Prevention, American Academy of Pediatrics, and American College of Nurse-Midwives have all recommended the vaccine in pregnancy [2, 3, 6]. However, it is still advised to talk to your doctor before getting the flu jab.

Types of the vaccine

The traditional influenza shots include the trivalent vaccines that provide protection from H1N1 (influenza A), H3N2 (influenza A) and influenza B [13]. The quadrivalent influenza vaccine ensures protection against all the three viruses mentioned above, in addition to an extra influenza B virus [13]. Both these vaccines are generally considered safe in pregnancy.

Why should you get a flu shot

The vaccine (trivalent or quadrivalent) will not just protect you, but also your baby who would receive the antibodies you develop, through the placenta [3].  According to a research, babies born to mothers who took flu jabs while pregnant had a 70% lesser chance of getting the flu before they were six months old [8]. This would be helpful since babies usually do not have much protection against flu during this time; they can be vaccinated only after they are over 6 months old [4, 6].

When to get the flu vaccine

You can get a flu shot anytime in pregnancy, irrespective of whether you are in your first, second or third trimester [2]. As the flu season mostly begins from early October, lasting till May, you should get the vaccine at the earliest before the season begins [11]. Your body needs two weeks for making the antibodies, and taking the vaccine early will give it enough time to get ready to fight against the virus [3].

Though it might not provide you 100% protection, it may still lessen your risks of getting infected by the virus [11]. It is essential to go for the vaccine every season as the strains of flu that come around each year are different [3].

It is advisable to only go for the injectable vaccine and not the nasal spray (Flu Mist) since it is made using the live virus, which may not work, and may also be harmful [2].

Besides expectant mothers, women who are trying to get pregnant, or undergoing any fertility treatment can also take this shot [12].

There are some speculations about this vaccine increasing the risks of a miscarriage, and having a baby with autism.

Studies conducted by the CDC and other organizations showed that women who took the flu vaccine (containing protection against the H1N1 virus) early in their pregnancy, and also in the previous season, were at an increased risk of a miscarriage. The findings, however, lack evidence and more research are warranted [2, 7].

Another finding conducted in Northern California between 2000 and 2010, analyzed the records of 196,929 kids to deduce that maternal vaccination had no relation to autism spectrum disorder in children [5].

If you are ill, have ever been allergic to flu shots before, or have suffered from Guillain-Barre syndrome (a rare immune system disorder), then inform your doctor prior to taking the vaccine [3, 8].

Do you need to go for a thimerosal-free flu vaccine

Thimerosal is a mercury-containing preservative mostly used in the flu shot vial to prevent contamination. Recent research reveals that flu vaccines preserved with thimerosal do not affect your pregnancy [9]; however, if you are doubtful about its safety you can ask your doctor to give you a flu vaccine without thimerosal.

Can you get flu from the flu vaccine

Flu shots, excepting the nasal spray, contain fragments of dead influenza virus instead of living ones. Hence, there is no possibility that you can get flu after taking the vaccine [8].

Chicken eggs serve as the culture for growing the flu virus which is used in making the vaccine. If you are allergic to eggs, let your doctor know about it before the vaccination [8].

Possible side effects of flu vaccine

The common side effects may be seen immediately after getting the shot, and include soreness, redness, swelling, and tenderness in the injection area. Some may experience rare side effects like a headache, nausea, fever, muscle ache, and fainting. However, all of these usually go away within 1-2 days [8].

Talk to your doctor at once if you feel sick after geting the injection.