The popularity of shrimps is nothing unknown. What you need to know before including it as a part of your diet during pregnancy is whether it is safe or not.

Is eating shrimp during pregnancy safe

It is safe to eat shrimp while pregnant because of its low mercury levels, like other seafood such as pollack, salmon, sardine, and catfish [1].  Its low calorie count [3] along with high protein (17 grams in 3 ounces of the fish) [4] and Omega-3 fatty acids, also makes it a healthy choice [6]. 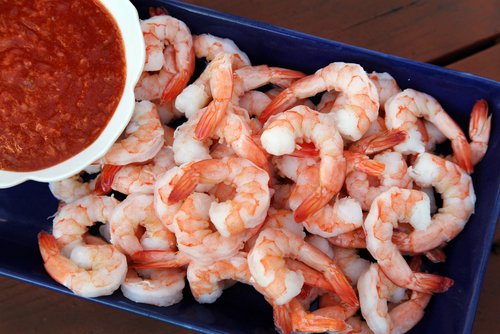 Because of its high omega-3 fatty acid content, shrimp is good for women trying to get pregnant as well, since the fatty acids are kept stored in your body for many weeks, giving you adequate levels of it when you finally conceive [8].

Can you have raw and cooked shrimp while pregnant

Raw: Eating uncooked or undercooked seafood is not safe, especially when you are pregnant, as it may put you at the risk of bacterial infections [5]. Hence you should avoid eating dishes like sushi, and sashimi [3] that has raw shrimp.

Also, when buying, make sure to go for the wild-caught shrimps over farmed raised varieties as the latter have a greater chance of being contaminated [9].

Cooked: Once the shrimps are cooked at a temperature of 145°F for about 2 to 3 minutes, it attains an opaque, pearly texture. You can then eat them safely as popcorns and sticks or add them to your noodles, rice, pasta or spring roll [2, 7]. Boiled or steamed preparations of shrimps like shumai are also considered safe. If you have leftover shrimps from the previous day’s cooking you may eat it if it is preserved well (make absolutely sure it hasn’t gone bad).

Shrimp cocktail, a popular appetizer, prepared by cooking or steaming shrimps and dipping them in cocktail sauce, is believed to be safe to have while pregnant, though in moderation. When you are dining at a restaurant or buying packaged shrimp cocktail, make sure the pieces are pink, which indicates that they have been cooked. Half-cooked or raw shrimps look gray and transparent.

Tempura, generally prepared from cooked shrimp is okay to have, though make sure it is not dipped in a batter of beer.

How much shrimp should you eat

According to the EPA’s (Environmental Protection Agency) 2015-2020 Guidelines for Americans, as well as the FDA (Food and Drug Administration), pregnant women should not take more than 8 to 12 ounces seafood (low in mercury) in a week, which amounts to about 2-3 servings [2]. So, if you take 2-3 servings of shrimp in a span of seven days, you need to refrain from having any other seafood during that time.

Eating shrimp is usually not bad as long as you follow the recommended limits, but overeating or spicing them with sauces like bang bang and Alfredo may lead to heartburn or other digestive problems.

Do not delay in talking to your doctor if you experience digestion problems or any discomfort after having it.

One response to “Can Pregnant Women Eat Shrimp”