You may be pleasantly delighted to see your newborn’s head full of hair or a little dejected if he is scantily haired. However, what you observe in the beginning may not be your baby’s permanent hair type, as it would gradually shed and grow again. As a new mommy, it is essential to understand the reasons for hair fall in your baby, so that you know when to relax and when to hit the panic button. 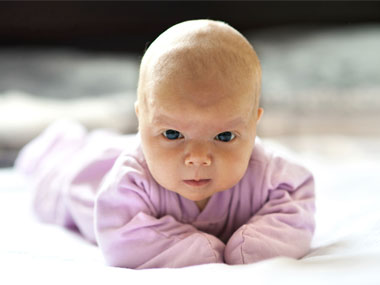 When does a newborn baby’s hair fall out

It is normal for newborns to lose hair in the initial six months of their life [1], which stops gradually after that period.

Why is my baby’s hair falling out

Drop in hormone levels: Before birth, a baby receives high levels of hormones (mostly estrogen) from your body. However, after birth, there is a major drop in the hormone levels, which results in shedding a lot of the hair your baby was born with, particularly on top of his head, and even on both sides [2, 6, 19].

Resting phase: The resting or telogen phase lasting for approximately three months, is often responsible for limiting hair growth in your infant during that period [1, 3, 7]. Birth trauma, fever or any autoimmune disorder may, however, prolong the resting phase. The little hair remaining would fall off in the new cycle when they are pushed out by the new ones that grow. His hair might have a patchy look at first, getting thicker and stronger with time [3].

Sleeping on the back: Since parents put their newborns to sleep on their back to minimize the risk of SIDS (Sudden Infant Death Syndrome), most babies tend to loose patches of hair in the back of their head due to the almost constant rubbing against the crib or bed  [8, 16].

Friction against a surface: Babies also have a habit of rubbing their head on a particular surface like a mattress or car seat, resulting in bald patches which go away once they are able to sit upright [6,10].

How to stop or prevent hair loss in newborn babies

Although there is no remedy for hair loss occurring naturally, certain measures may be taken to minimize its intensity:

If your baby is losing hair even after six months of age, along with other symptoms like loss of appetite, bring it to the notice of your doctor at once as this could indicate an underlying condition, needing treatment [1, 5].

Possible medical conditions for a baby’s hair falling out