Apple cider vinegar has been a useful remedy for years to treat digestive disorders, and other ailments like a sore throat, and varicose veins, alongside maintaining blood sugar and cholesterol levels [1, 2]. When it comes to pregnancy, where you have a whole list of dos and don’ts, it is essential to know apple cider vinegar’s safety when consumed or applied topically. 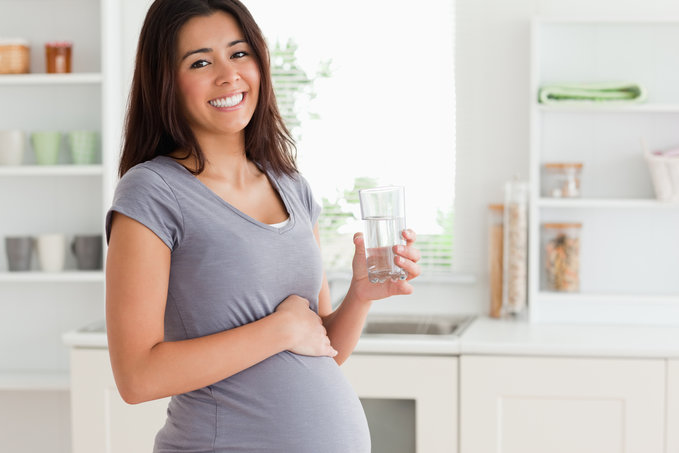 Is It Safe to Drink Apple Cider Vinegar While Pregnant

Is it safe to drink apple cider vinegar while pregnant

Apple cider vinegar comes with a lot of health benefits and many expecting mothers have claimed it to be good during this time. However, make sure to talk to your doctor before using it internally or externally in the first, second and third trimesters to remain safe.

Always opt for pasteurized ACV as unpasteurized ones may be contaminated with bacteria [14]. It is not recommended to drink it raw either; though many have reported being fine after consuming it raw, it is always best to dilute it with water before use.

Taking two tablespoons of apple cider vinegar with a half cup of water after a meal can provide relief from heartburn (common in the third trimester), as well as nausea and vomiting since it balances and controls the stomach acid production [3, 8, 9].

Applying ACV topically on the affected area or adding it to your sitz bath may help lessen itching and pain caused by hemorrhoids [8].

Drinking apple cider vinegar with warm water and honey or using it as a foot bath may work as a remedy for swelling or edema that often aggravates after the fifth month [11, 12]. Its high potassium content (73 grams per 100 grams) helps to lessen water retention by reducing sodium levels and raising the production of urine [12, 13].

Because of its anti-bacterial properties, ACV is useful for relieving bacterial vaginosis seen in about 10-30% expectant mothers as well as urinary tract infections [5]. Adding one to two cups of apple cider vinegar to your bath would help eliminate bad smell, also maintaining the vaginal PH [16, 17, 18]. You can also use two tablespoons of ACV with one cup water to rinse your vulva two times a day to prevent or fight bacterial infections [16]. However, avoid douching with it as it may trigger yeast infections by altering the natural vaginal flora [28].

Since ACV makes the urine acidic by inhibiting and flushing out the infection-causing bacteria, mixing a tablespoon of it to three tablespoons water would be effective for UTI [24].

Because of its antibacterial and anti-fungal properties, apple cider vinegar works as an effective remedy for treating a host of skin ailments like acne and eczema [19, 20]. Besides drinking it, applying it topically (1 part vinegar to 3 parts distilled water) using a cotton ball can be beneficial.

Due to its acetic acid content, ACV acts as a great exfoliant, being useful for women affected by melasma or the mask of pregnancy [21, 22].

Its antibacterial, anti-fungal and exfoliating properties make ACV useful for fighting dandruff. Apply to your scalp directly using cotton balls, and massage for about three minutes in a circular manner. If you have sensitive skin, you can use it as a spray twice a week by mixing ACV and water in a bottle in equal parts [25].

A study conducted at the Arizona State University revealed that having ACV diluted with water and saccharine post meal could help in lowering the sugar levels. Another research mentions that having apple cider vinegar before bedtime would aid in moderating the sugar level on waking up [26]. So, this might be helpful for gestational diabetes.

The acetic acid in apple cider vinegar is said to inhibit the liver’s cholesterol producing ability. Drinking a mixture of a teaspoon of ACV with one glass apple juice, or two teaspoons ACV and a teaspoon lemon juice in warm water might be advised  [33].

Since cough and cold are common during pregnancy because of your changing immune system [21], you can gargle with ACV or drink a glass of it mixed with warm water [27] every morning.

Besides pregnancy, apple cider vinegar is also said to improve fertility, helping one to get pregnant, though there is no concrete evidence about this [4].

Can drinking apple cider vinegar while pregnant be bad

Though there are no known dangers of apple cider vinegar while pregnant, drinking too much of it might lead to adverse effects. If you experience any feelings of discomfort after having it or develop rashes post applying it on your skin, contact your doctor at the earliest.